The Marcellus and Utica Shale

The Marcellus and Utica Shale

The Marcellus Shale extends under West Virginia, Pennsylvania, eastern Ohio and southern New York. The most productive areas for developing the Marcellus is where the formation is 5,000 feet or deeper. The Marcellus is an organic-rich source rock full of hydrocarbons, with very low permeability, and was previously considered nonviable as a commercial oil and gas target. However, thanks to advances in both drilling and completion technology, this formation is now considered one of the most prolific natural gas fields in the world.

Our Marcellus Shale program began in 2007 with the testing of exploration wells across our acreage. “Testing” simply refers to collecting data in order to understand where the formation might be most productive.

Examples of test data include:

The foundation of understanding the rock—pieces of the formation whose porosity, mineralogy and maturity can be measured.

Running analytical tools down existing wells to gather data about the formation.

Drilling and producing a well to understand how it behaves.

We have tested the Marcellus across much of our acreage, which provides us with detailed knowledge about the geology underlying our operating areas, thereby giving us a unique advantage in the basin.

What changed the Marcellus from a nonproductive source rock to a major natural gas producer? The answer is combining horizontal drilling techniques with hydraulic fracturing to stimulate the formation. The shale has low permeability—the very small spaces between grains don’t let natural gas, water or liquid hydrocarbons flow easily—so hydraulic fracturing enables us to create fractures in the shale to increase the flow of natural gas. These fractures are created when a mixture of water, sand and a minimal amount of chemical compounds are injected at high pressure into the formation. Once the fractures are created, the natural gas can be extracted. Since 2007, Seneca Resources has collectively drilled and completed more than 400 horizontal Marcellus wells.

The Marcellus Shale is represented in the below outcrop map.

The Utica Shale is a hydrocarbon-bearing formation residing several thousand feet deeper than the Marcellus Shale throughout the Appalachian Basin, including Pennsylvania. Seneca Resources first targeted the Utica Shale in 2011 and has tested it across much of its acreage.

With a solid understanding of the formation, we’ve focused Utica development in Elk, Cameron and McKean counties in the western portion of our Pennsylvania acreage, and Tioga County in the eastern portion.

Generally, well performance is stronger in the Utica than the Marcellus in the same area. This is due to greater thickness of the reservoir and higher reservoir pressure due to its greater depth—more than 10,500 feet below the surface in the west and 12,000 feet in the east.

See our outcrop map for representation of the Utica Shale.

A major advantage of having a stacked play strategy utilizing multiple rock formations is that it allows us to take advantage of existing infrastructure. By making repeat visits to previously used pads, environmental impacts are minimized and greater cost savings are realized. 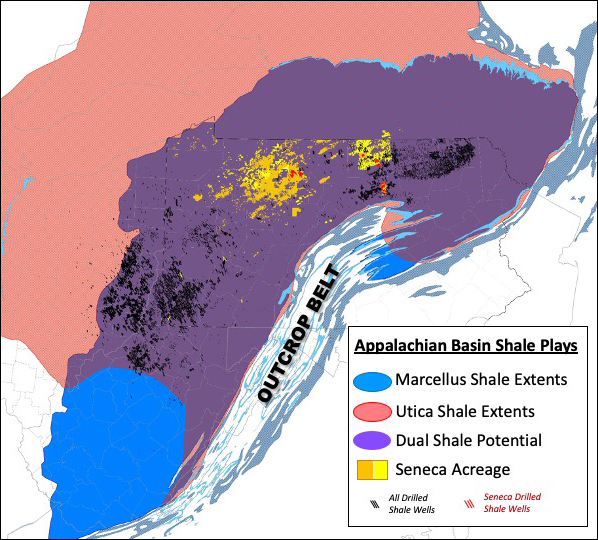